We have just released the first version of the EVRYTHNG CLI (Command Line Interface)! Similar to other products and systems you may already use (including Git, AWS, npm, etc.), the CLI is a tool that provides a structured, simplified interface to the API for developers to use when prototyping, querying, testing, and integrating with the EVRYTHNG Platform.

Why Use a CLI?

The ultimate aim is to remove some of the complexity and knowledge requirements when performing simple interactions with the API. As a simple example, looking for a Thng by ID that has a certain tag to discover which project it is in with curl looks something like this:

Quite a lot to type by hand, or recall from memory!

Similarly, using a visual request tool such as Postman would involve a similar number of controls to be configured, options to be looked up, etc.:

However, using the EVRYTHNG CLI, whose command syntax is structured similar to the evrythng.js SDK, the query is simpler and more memorable, thanks to the opportunity to remove complexity and required knowledge:

You can easily get started using the CLI by installing it globally with npm:

Then, simply type evrythng to be guided through setting up the initial Operator: 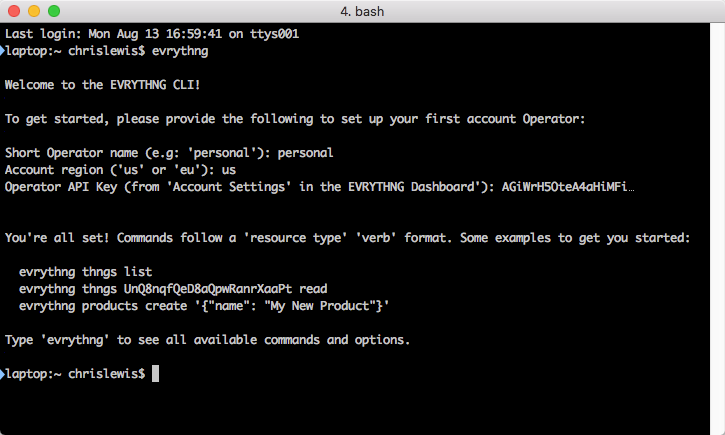 Once you have your first Operator set up, you can view all the available commands and options by simply typing evrythng. This also includes some interesting example commands for you you try out.

For more information on the available commands and options, and more usage tips, read the EVRYTHNG CLI documentation page.

The layer the CLI forms between the API and the developer using it allows many more such opportunities for aiding the user and providing additional functionality. These features include:

In addition to creating, reading, listing, updating, and deleting EVRYTHNG Platform resources, the CLI allows you to do some other interesting things in a more streamlined manner. Here are some examples:

The --summary switch transforms the usual JSON array output into a simplified view showing just the id and name of each item. This is useful for quickly finding the ID of a known item:

Most simple resources (projects, Thngs, products, collections, files, places, etc.) can be built without knowledge of the JSON payload using the --build switch. This draws on the definition of that resource type from the evrythng/swagger API description to ask the user questions about the data they want to specify for each property of the resource.

For example, creating a Thng:

The resulting payload will be displayed, and the CLI will automatically complete the process by sending the creation request. 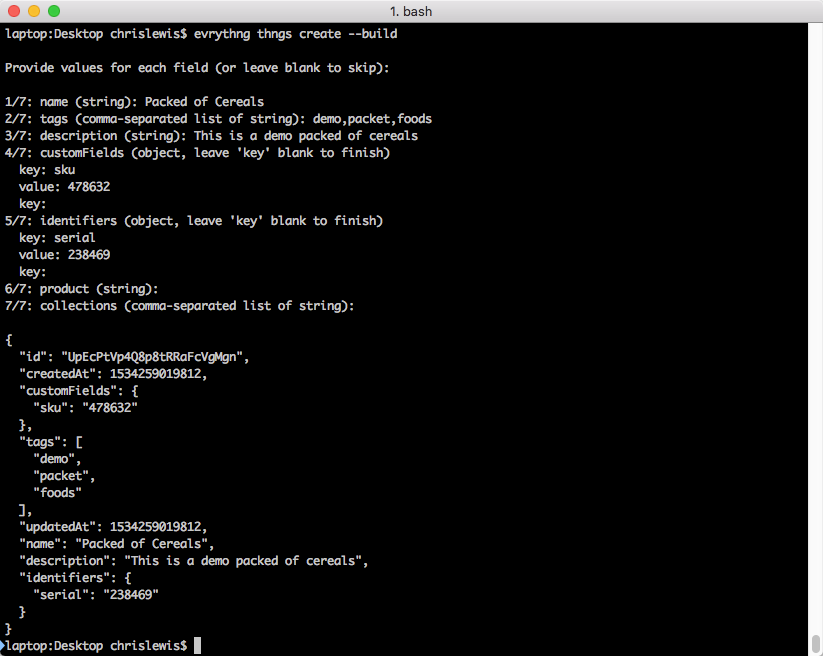 Anonymous Application Users are useful for web applications and representing users of an integration where their personal details cannot or are not known. This special request is simplified using the CLI, and the --api-key switch to override the currently selected Operator with the required Application API Key:

Scripting with the CLI

Since each request performed with the CLI is a discrete operation, it can be used as part of a larger script to automate the creation of a particular account or project setup. This is achieved using the --field switch to return only a certain field from a JSON object response.

A simple example script is shown below that sets up a Thng relating to a product, all scoped to a new project, shows an expanded view of the Thng, then cleans up after itself:

Our hope is that this new tool will help developers accomplish a wide range of routine and automated tasks in less time, and with more accuracy. We have exciting plans for more usability and integration features in future versions, so stay tuned!

In the meantime, please let us know if you encounter any problems or bugs.